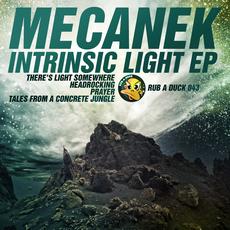 Mecanek started out making music at a young age. As so many youngsters in the Netherlands, he got involved in the hardcore techno-scene. In those days he got featured on several compilations and vinyl-releases.

As he had always been interested in different kinds of music, he decided to broaden his horizons. When local dj DZD2 introduced him to dubstep, Mecanek heard the potential of this new genre. Inspired by pioneers like Skream and Benga, who seemed to blend all sorts of different sounds into one coherent style, he wanted to undergo this exciting journey himself.

Not without results. He did a brief return to his roots together with good friend and hardcore-producer D-Version. DJ Kutski described this collaboration, a combination of hardcore-techno and dubstep, as ”something quite unique” and “an awesome experimental track”. He immediately featured it as “Hardest Record in the World Right Now” on his BBC Radio 1-show. Mecanek also did a pure dubstep-remix, which got released on different compilations.

Now it’s time to share his musical vision with the world, by dropping his debut-e.p. on Rub A Duck. Some people believe that all dubstep has started to sound alike, but Mecanek proves the opposite by providing four entirely different tracks. The Intrinsic Light EP features music that reflects aggression and utter despair, but also hope and euphoria. Even though they sound different, they are definitely Mecanek-tracks and together they provide his ultimate mission statement: expect nothing, expect everything!